Mat was the creator of the most colorful sounding amps in tube amp history. 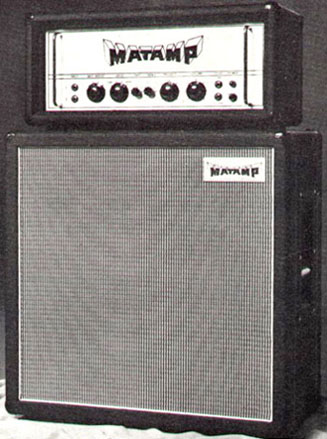 Mat Mathias was born in 1923. In 1939 Mat was evacuated to England with the entire school
he was attending in Berlin. He was first settled in a camp at Sandwich on the south coast of
England and then later moved to Leeds. While in Leeds Mat was in Digs at a private house with some
other boys also from the same school. Later on Mat found work in a comb factory, then interned
at York Race Course on the Isle of Man.  Mat had a friend in Bradford who found him
work in a cinema projection box as a trainee. From there he moved to Huddersfield to work at
the Ritz Cinema as the projectionist under a chief.

Next Mat bought a share of a business doing Radio Repairs in Albion Street. The original owner
wanted to leave so Mat was obliged to take on the whole business and pay for it with what he
made each week. Mat did not have any wage left for himself for a long time but eventually the
debt was paid off. When television became available Mat went into TV and gradually built up a
small business. He did some television repairs for a firm on King Street, in Huddersfield.

In 1956 Mat was married and the following year in 1957 he bought the King Street shop and his
wife Ruth, worked at King Street whilst he kept doing repairs at the shop on Albion Street.

Mat had an apprentice at this time who played guitar and used a Tandberg tape recorder which
was part of his Hi-Fi stock. Mat made a recording of his playing. Mat then built up his recording
equipment and spent many hours recording the local pop groups. The groups would discuss with
Mat what they wanted from an amplifier and Mat would make modifications to their equipment.
The King Street Shop became known as MATAMP in 1958, and eventually in 1962 Mat designed
a "new" amplifier for the guitar which he called MATAMP.

By 1964 MATAMP amplifiers were made on neatly bent aluminum chassis with a white front panel
with the name MATAMP on the front with a single underscore line under the name. With such an audio
sound, people in the pop business began to talk and in 1968 Mat was then approached by a man in
London named Cliff Cooper. Cliff wanted some amps made for his studio in London called Orange.
A sample amplifier was made and taken to London where it was tried by Peter Green of the group
Fleetwood Mac. The amplifier was a success and Peter Green used it to record Albatross which
went to number one on the charts and has been popular ever since. Mat's amplifiers were now in
demand. Fleetwood Mac went on tour through the United States with Mat and he realized that the
amp chassis and box would need to be more heavy duty and the power output would need to be at
least 100 Watt. His next generation amp with an enameled steel chassis with heavy duty mains
and output transformers sporting 4 EL 34's introduced Mat's GT-120.   This became the studio and road
worthy amp for most professional musicians immediately.

After this blossum of success Cliff Cooper decided he wanted some amps to have the name of
his recording company on the front panel. In 1969 some ORANGE Matamp amplifiers were made
from the same design, right along side the original black vinyde MATAMP equipment. Various
models ranging from 2-EL34 20 Watt Amps to 200 Watt units with 4-KT88's were made one
at a time by Mat for studios, sound stages, bands and touring companies.

By 1973 Mat decided he would make amplifiers just for himself and disconnected his association
with Cooper's company Orange and the MATAMP name was removed from all ORANGE items.

Mat continued to make amplifiers for guitarists and slave unit models. D.J.'s became popular and
he designed and made an array of PA Amps and Mixers that are still ahead of their time.
With disco thriving at the end of the 70's and the 80's digital era ahead Mat's PA gear was put
to use to fill the void where the towering 120watt stacks in arenas left off.

In 1981 Mat Mathias designed & created his "Rembrandt" guitar amplifier unit known as the V-14.
This 160watt 1X15 combo amplifier was "true" guitar tone at all ranges. Featuring reverb and a
boost channel on a very large chassis that could be removed and mounted into a head sleeve
to drive 4 cabinets if desired. 100 chassis were made and Mat made about 30 that were ordered
by pro musicians. By 1984 the Matamp factory was completing assembly only from chassis of
models from the past. By 1985 Mat's health started to fail and in July of 1989 Mat Mathias passed
away.

The factory continued on with Matamp functions with the help of Mat's wife, Ruth and their two son's.
Final business details and the closure of Mat's 31 year Pro Audio Company became the end
of MATAMP in Huddersfield.   1958 - 1989

The Mathias Family put the factory/shop up for sale and it was purchased by a local record collector &
and upholsterer, Jeff Lewis. Lewis originally from Whales had never worked or been associated
with Mat Mathias, however as most of Huddersfield England, he was keen to the value of Matamp
& Matamp Products.   According to the Mathias Family, there was no association or relations
with Lewis prior to 1993.

1994 Jeff sorted through the shop and then immediately contacted Orange.
Cliff Cooper and Jeff Lewis, then entertained the idea of building ORANGE Voice Of The World
amps again with hopes to distribute through Gibson in the USA. This venture turned out to be a
disaster, and financially was the death to the new business owner putting Matamp UK on
the rocks.  Orange moved on and revolutionized their name.

The Matamp shop continued with amps made from spare parts and refabbed Matamp classics
that were sitting in the shop.

SLEEP, from Santa Clara California owned several recovered GT's as green amps for bass & guitar
with various green speaker cabs. On the down side lots of gear anxiety with the quirky old amps
often blowing on stage. These odd units owned by SLEEP, were the only ones in the
USA besides 4 other pieces.  They remained a myth.


In 1997 an individual in the USA changed the "myth" into a reality.
A customer since 1994, who had been ordering items from Matamp went to place an order in 1997
and was informed by Jeff in the UK that he was going to start making Air Conditioning Units,
and was ending Matamp's struggle with amps.   Jeff explained to that he would sell him
all of the spares in the Huddersfield shop.  Enough to fill a shipping container !

The units where photographed in the USA, and within 3 days started a simple website with photos.
This started the exposure, and put Greenamps online to illustrate GREEN Stacks The first order for
an amp came in to Matamp USA the makers of Green Amps.  Jeff Schultz from a band called Bongzilla.
By mid 1998 MATAMP USA made a deal with Jeff Lewis to be the sole distributor for Matamp World Wide.
MATAMP USA placed an order and imported 20 amps and 24 cabs to be made, and by
August of 1998 came the debut www.matamp.com .

By January 1999 the "Official" MATAMP Distribution, USA office was announced to the world over
the internet, postal mail, and magazine articles in Vintage Guitar & Guitar World .

The availability of amplifiers from MATAMP USA was being spread and promoted. In the UK,
amplifier engineer Dave Green began with MATAMP in 1999 and resurrected original schematics
of Mat's and began runs of the original GT-120. Later in 1999 Joel and Dave released the
"Legend" GT120 Master Volume Version and many others.

Matamp USA was on the move with the Indy Scene and 1998 Green Amps makes
actual production debut along with the USA's Black Amps in 1999, White Amp in  2000.

The amplifiers began to arrive into the USA and were then put through harsh testing. After the
completion of inspection and testing, Matamp USA and Dave went to the table and sorted out ideas that
would mold the future of MATAMP. Original and New models were beginning to be released and
the demand for custom colors introduced a buffet of amps in various vinyde choices for the USA.

During the year 2000 the MATAMP shop went under construction and was remodeled.
The construction induced delays for USA orders and wound up creating a down time for the
UK shop which lasted until the end of winter 2001.  Big changes for the shop, and bigger
changes to the amp line and cab construction.

2001-2004 the Matamp UK units were built on Ashdown Chassis.  The amp units changed
drastically and now sported chicken head knobs.   This was a problem for many USA orders
expecting the traditional look Matamp USA promotted and sold.
The old school look and feel of the amps was lost during this period which was not
congruent with Matamp USA.

Terms were finally agreed upon on how the amps would be built. The first seven for the
new line called ELECTRIC Amp USA were put into production and the first seven
fGREEN Amp units in this format. The units arrived that summer and were cool but
but a long way off from the designs and what was agreed upon.
Some Green Amps were done in black....

2005 Matamp USA ceased production in the UK Shop, and moved forward with it's color
Logos to be produced by ELECTRIC AMP, USA.   Now the Green amp had a home on the soil where
it's users dominated.  Most of all it was built for the first time from all OEM parts instead
of the alternate part variations of Orange / Ashdown / used recovered Matamp version.

When Matamp USA pulled out of the UK it created a vacuum and by 2005 the Matamp
UK Shop had no valid production. The shop manager John Tilley having many disputes
with Jeff Lewis left the shop prior to the December Holiday Season.

During 2006 Jeff Lewis published a pamphlet "Matamp at 60" announcing they where the oldest
amp company and established in 1946 ???  A nice new line of little amps, little cabs too. According to
Dave Green, a total of 9 re-issues of Mat's S2000 where made in 2006. Two of which where destroyed
during shipping to Germany.

With production at zero and tensions high in Huddersfield during 2007 the last original
[next generation after Mat] employee Dave Green left Matamp UK's Huddersfield Shop
to work for Hayden Amplification.  Dave has had great success with Hayden that is owned
by Ashdown Engineering.  Dave Green custom taylors amps and takes a jet to
the USA to customize several Hollywood Musicians two time per year.

Matamp UK continues it's production and has had five different amp builders since 2007.

In 2010 Matamp UK made a feeble attempt with eroneous statements to WIPO in Switzerland
regarding this very domain name and the "actual" ownership of the name MATAMP USA.
In less than 30 days WIPO [ World Intellectual Property Organization] made a clear decision
that indeed MATAMP USA in the United States of America was the original owner and sole
owner of www.matamp.com .  Furthermore, during their investigation they found that Jeffrey
Lewis and his Canadian Distributor had committed "cyber hijacking" by registering in bad
faith 14 domain names using Electric Amp, USA's trade name and color logo names.  These
domain names were being used to publish libel and defamatory information about ELECTRIC
AMP USA. Lewis and his Canada Dealer  were ordered to CEASE.  To date they still have these
hijacking domains pointed at their own sites attempting to redirect customer traffic to their sites.

The tradition of catering to the needs of all kinds of musicians for Pro Audio Equipment
lives on with Electric Amp, Hayden and Wienbrock.

All Respect to the great innovator Mat Mathias, and long live Pro Audio.